Yes, you read that right. Our almost 3-year-old daughter just got her own crate to play in, and she couldn’t be happier. Note the smile on her face in the photo. 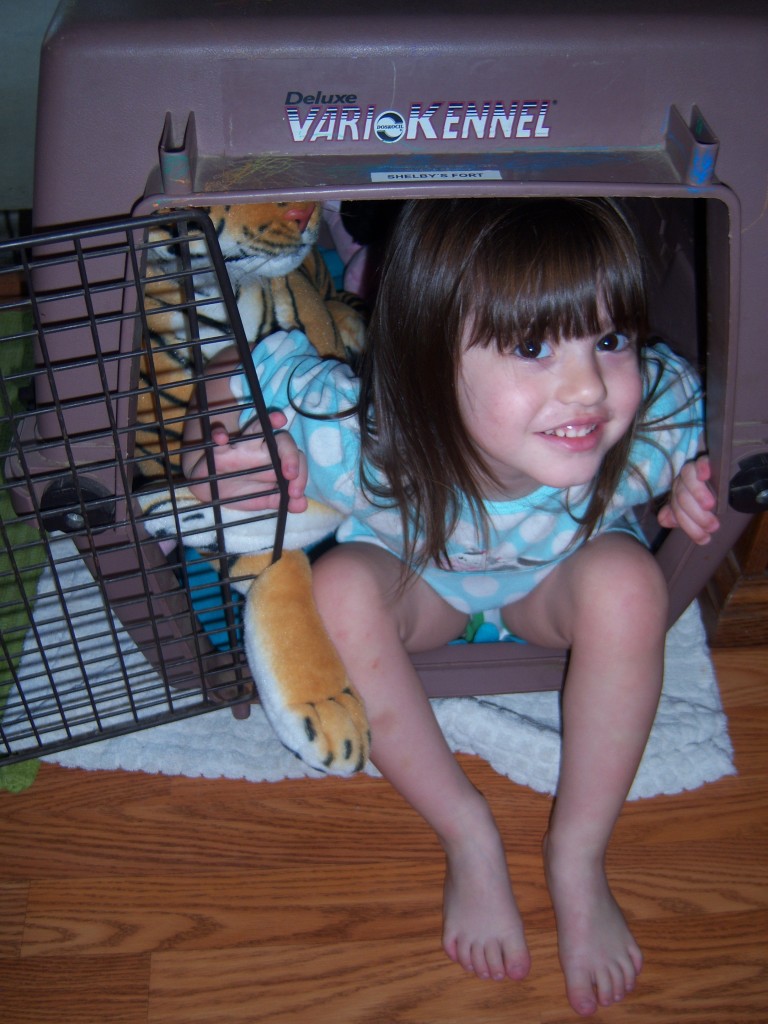 Hanging out in her new “fort” with all of her toys

It started just a few weeks ago, when she figured out that one of our dogs’ crates had an easy-to-open door. Shadow, the quietest, calmest Border collie you’ll likely ever meet, was my husband’s dog originally, and is now Shelby’s dog in many ways. The two hang out together a lot: Shadow will seek Shelby out and lay down next to her. And when she approaches him, he closes the distance and often gently licks her face (an act which used to upset my husband, but he’s since relaxed back into his dog-loving original self.) Shadow responds appropriately to Shelby’s often cryptic commands, both verbal and hand signals, and wags his tail happily when she gives him treats. His face was not so happy, however, the other day when I turned away for 15 seconds and turned back to see Shelby squished into his crate with him. The look on his face was a mix of despair and “help me, please”. I promptly called him out of his crate, which he reluctantly did, and invited him to lay next to me on the couch instead. Shelby opted to stay in his crate and take her afternoon nap there, face down.  Hmmm… 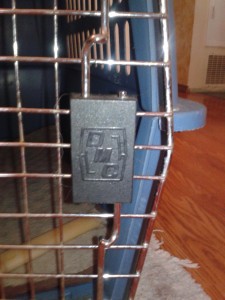 Step one was to replace Shadow’s easy-open crate with one that has the traditional spring-latch door that is not so easily opened. I was quite pleased with myself, until Shadow left his crate to go outside, and Shelby promptly crawled back inside to hang out there with her Orange Tiger and other stuffed animals, leaving Shadow once again without a home base to return to when he came back inside.

I had a conversation about this with our roommate, my good friend, and she reminded me of how much fun “forts” were to make when we were younger. We recalled the various ways in which we had made forts for ourselves when we were kids, and it occurred to both of us that perhaps Shelby really needs a fort of her own. Since there is never a shortage of extra crates in our household, we thought, what better option than to give her Shadow’s old crate, which we knew was already comfortable for her?

When I asked Shelby if she’d like her own crate to hang out in, her face lit up like a Christmas tree. She was so excited that she helped me to clean and scrub it, then put her own big blanket in it. She could hardly wait to cram all of her favorite toys (mostly stuffed animals) into it, and crawl in alongside them to hang out. Problem solved… unless CPS comes calling? Hopefully they are dog-lovers with crate trained dogs, and then they will certainly understand!

So now Shelby gets to hang out in her crate and Shadow has his hallowed den back as his safe space to get away from the kiddo if he needs to. But best of all, his crate door latches solidly shut so that I can comfortably leave the room if I’m doing chores without worrying about how Shelby might annoy him next. Sigh… peace… at least for now.